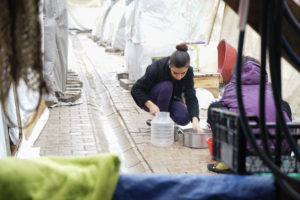 In 2014 when the World just started to hearing and suffering from ‘savagery stories’ of ISIS, Kurdish people felt it right in their hearts because of the massacre/genocide attempt of Yazidis from Sinjar, Iraq and Kobanê, Rojava Kurdistan. Kurdish people from Kobanê had a chance of self-defence but unfortunately Yazidis neither have that chance for self-defence nor they were protected by the Kurdistan Region of Iraq security forces. Yazidis were left alone. Thousands were killed, thousands more girls and women were kidnapped as slaves, and hundreds of thousands were forced to flee.

Many Yazidis didn’t want to be settled in Syrian refugee camps run by Turkish government. Because they believe that those in the Syrian camps are affiliated with the Islamic State and they are scared of Islamic symbols there. Their historical and current memories of these symbols were still haunting them. So, they have been settled in the camps of the municipalities run by the pro-Kurdish party. 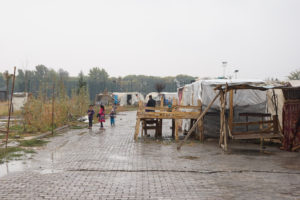 Because of they rejected to stay in the governmental refugee camps, Yazidis have not been given a legal status (“refugees” or “persons benefiting from temporary protection”) by the Turkish government. They have been supported only by Kurdish municipalities and by Kurdish people, NGOs, and international organizations.

When they came to Diyarbakir in 2014, they were more than 5.000 people. Most of them went to the European countries and some of them back to Iraq. Currently there are 1.300 Yazidi refugees in Diyarbakir camp and as Youth and Change Association; we have been trying to support them mostly in the social and cultural fields. One of our main activities for them is with the partnership of SCI Italy. We have organized 2 international work camps (December 2015 and October 2016) with SCI Italy and SCI Catalonia. However, we organized an international youth exchange project between 30th September – 9th October 2016 in Diyarbakir. 33 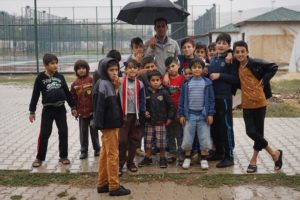 participants from Italy, Germany, Bulgaria, Romania and Diyarbakir came together for 10 days. They have organized different workshops, seminars, group discussions, presentations etc. And varieties of different activities were coordinated for more than 200 Yazidi children during 3 days.

Dozens of Kurdish co-mayors have been arrested and the Interior Ministry appointed governors and sub-governors to run the municipalities since September. Unfortunately co-mayors of Yenisehir Municipality –which is mainly responsible from the refugee camp-, were arrested in the 7th December, 2016. “The new managers” have been trying to convince Yazidis to move the government camps but they are refusing go there and they said that if they have to leave from the camp, they would prefer to go to the camps in Iraq. Yazidi refugees are afraid of being sent to the government camps during the winter. As youth workers, we are trying to prevent this possibility and making this situation more visible in order to not let Yazidis suffer again (1).

It is very important for us to increase international cooperation, show more solidarity and make relationship with all World communities. The activities which SCI are doing in all around World are very respectful and valuable for us. We have worked many times during this year and we believe that we have achieved something important together. In this sense, partnership with SCI Italy is always a privilage for us.

There is a Kurdish proverb: “Kurds have no friends. But mountains”. Kurdish people believe that probably because of the have been deceived many times by sovereign Powers during their history. But, today Kurdish people don’t have mountains but also have so valuable and strong friends like great mountains. Especially our Italian friends, comrades proved it not only in Kobanê but also in Amed (Diyarbakir).

(1) Eventually the refugee camp was evacuated