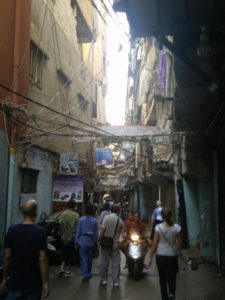 Shatila Beach, it is 3 p.m., the sun is at its zenith. You can hear the sound of the water, but it is not the sea. A young man looks at us puzzled as he tries to fill a plastic tank on the roof of his house with a large pitcher. There is no sand on the terrace, but a thick layer of dust covers everything. We are on the roof of the Guest House. One more floor and a rusty stepladder above us and then many houses and many precarious lives, since 68 years and for 4 generations.

The Shatila refugee camp is 1 km square big. About 20,000 Palestinians live here, but no one knows exactly how many people wander, play, buy, work, love in this maze. In this structure already collapsing, there are some Bengali and thousands of Syrians, in addition to the others. The tap water is salty: Shatila Beach. However, it is not seawater and leaves a sticky coating on us. The power is limited to only a few hours per day.

“We pay the water three times here in Shatila”, explains Mohammed while driving like Ariadne’s thread in the labyrinth of alleys, between scooters driven by ten years old children, bored men sitting on plastic chairs and thousands of windows from which we can glimpse women washing laundry or watching a Turkish soap opera on the television. “The water that comes from the tap costs each family $ 20 a month, but you cannot drink it. Therefore we have to buy it in bottles – of course be the most popular brand is Nestle – and then we buy water from large bottles in order to washing dishes, cooking … “. Some child passes by our side, dragging the precious water in plastic jars of modernity.

We are in the twilight of the Children and Youth Centre office, in the middle of Shatila. After 24 hours we are still totally unable to get out of here. “If you get lost, in any part of the camp, do ask for Abu Mujahed, and you will be taken to the Centre, as everyone knows who he is.” The magic word now nor turns into human features and there he is, Mr. Abu Mujahed. He is sitting on a damask chair, but he promptly stands up to prepare us a coffee. He has white and thin hair, olive skin tone full of age spots, an open smile, the typical Palestinian pessimistic realism, an innate care for the children who catch his eyes when they step into the room: he stops political considerations and adults conversations and he gets closer to ask “how are you darling?” and to distribute kisses and caresses.

“Our association was founded in 1997 with the aim of promoting the Convention on the Rights of the Child and encouraging its implementation here in the camp. You have probably realized that here the rights of children, but in general of all people, are violated every day”. The association’s activities have focus in particular on education, trying to keep the children busy with positive and resilient activities. There are many artistic workshops encouraging the development of relational and social skills. “I attend the course of Dabka, English and also rap” B. says, speaking an excellent English for his 13 years of age while eating hummus.

“Every year we expect something to happen, we expect THE SOLUTION that will put an end to our precarious conditions. However, do not deceive yourselves, as the problem here is not poverty. People have discouraged and have stopped fighting for their rights. Che Guevara used to say something like that imperialism makes people struggling every day to survive. The priority is then eating and you cannot plan your own life over the next two weeks. This brings us to compete with each other; we are not able to look for the causes of problems and to strive for solutions. People here in Shatila do not need social workers, need revolutionaries! “.

There were many armed “volunteers” in the 70s who supported the Palestinian cause and became immediately “comrades” of Palestinian fighters, respected for their choice of living in the fields as people from the fields, as to acquire Arabic names: Mohammed Ahmad, Hafez, the revolutionaries. Then there was the war, and after 1982 the social conflict was as quiet, normalized by the daily, even though minimal, response to needs given by humanitarian organizations. That is how fighters disappeared and social workers have appeared.

The fan turns too slowly to cool the office of the CYC. Outside a happy music attracts noisy children, but inside the words weigh more than the air. “The war in Syria is everywhere: it is here in the camps, is in Italy and Catalonia, where you come from, it is in Europe,” Mujahed carries on talking quietly. “People need to be aware of what’s going on here, in Syria and in the world. We no longer want to see dying this way our children, nor children from other parts of the world and yours”.