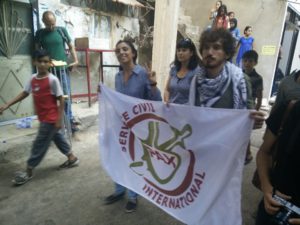 How often this verb recurs in the life of a young person.

The thought immediately goes to the clear days of hot summer weather, when your face is exposed to a constant sun, and you walk around in the suburbs during the most unworkable hours, in order to seeking out some money to cover the university boarding costs.

Alternatively, you think about the travelling rotation of a Friday evening, when you navigate here and there in front of the gazebo of your Association to catch the gaze of future male and female activists to be involved in the local group.

However, the distribution of pamphlets in Beirut is quite another thing. If you call it that way, it seems even an understatement compared to the emotions that we volunteers are feeling these days.

Wandering in the uncertain maze of Shatila that makes you uncertain, in order to try to involve as many people as possible, can seem at first blush an enormous challenge. We certainly have a feeling that we are not on top of it, or we even turn out to be arrogant in the act of distributing flyers, after travelling nearly 2,500 kilometres as the crow flies. However, here there is a massacre to remember. Here there are victims to pay our respects. Here there is a story that cannot sunk into the arduous twists and turns of oblivion. Here we are not dealing with a simple distribution of flyers. There is something much deeper to aim for.

Then we go on, equipped with hundreds and hundreds of Handala illustrations 1, a character that we learned to love over the years of activism and militancy. There are three generations of Palestinians in front of our eyes, and it sounds ironic that we, as a group of international volunteers, are remembering almost with intellectual pride a massacre like the one of Sabra and Shatila. Yet the eyes of Palestinian men and women, marked by wrinkles filled with frustration for the past and concern for the future, infuse us with goodwill and thankfulness. “Shukran” 2 is the least common denominator of their responses, combined with a kind smile. You do not see only the awareness in their eyes, but you also can see the feeling of not resignation.

We continue on commemorating the massacre carried out by the Lebanese Christian Phalange, the Army of South Lebanon and the Israeli armed force in 1982. Not forget is the categorical imperative to preserve their own identity, to keep on resisting and to transmit all those things to their sons and daughters.

Paraphrasing what Pertini 3 said, “The best way to think of the dead, is thinking of living people.”

2) Shukran: thank you in Arabic.