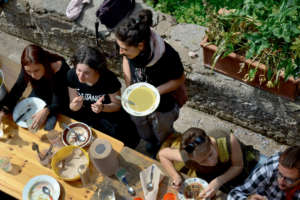 La Città dell’Utopia is a project of the SCI (Service Civil International) that takes place in Casale Garibaldi, in Rome’s San Paolo neighborhood. It constitutes a social and cultural laboratory dealing with key matters related to a new model of local and global development which is balanced, sustainable and fair. It is based on the concept of «social capital», according to which a region’s resources are not measured by economic indicators but by its capacity to generate social cohesion, inclusion and solidarity.

In this huge house in which, rumor has it, Giuseppe Garibaldi sojourned some time back in the XIXth century, volunteers from all over the world meet to experience cultural and generational exchanges in different activities. It is an open space for anyone who wants to participate, and it also works as headquarters for a number of organizations committed to working on issues such as immigration, childhood, sustainable lifestyles, gender equality and the promotion of culture.

I visited it for the first time in 2013. I remember that the decision to do a work camp there (the No Border Fest) was more inspired by a causality than it was motivated by a clear philanthropic intention: it was my first journey with open wings, I was beginning to test the heights and depths of what I was able to do, and I had correctly assumed that living for fifteen days in the company of “total strangers”, working with a common objective, would somehow give me the nudge I needed to finally let go of the past and gain new heights in my flight towards a different horizon. The experience turned out to be great. Not only because of the work camp itself but mainly thanks to the people I met and their life stories. 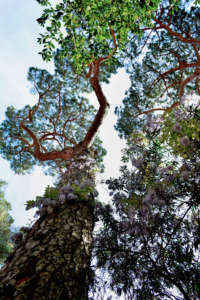 This year, the day that Spring began in the Northern hemisphere, I was arriving back again in Rome, for the third time. From Fiumicino to Termini, I gave in to the exhaustion of a whole day of intercontinental travelling and snoozed on the bus, to wake up in the city center itself, on a Wednesday at noon. I let myself go, backpacks and all, with the unstoppable flow of human energy descending into the dense atmosphere of subways: I did not need to check with any map because I knew that I had to take Line B, heading to Laurentina. As the recorded voice of the wagon announced the next stops, I felt that an invisible and indefinite part of my body began to expand. Cavour (the traditional via that ascends from the Italian capital’s heart up to the Piazza del Cinquecento); Colosseo (and I did not think about gladiators nor emperors, but just about the last time I had seen that monumental building, in 2013, when, together with my work camp mates, we had witnessed the LGTB Collective parade and we had wondered at such a perfect contrast of ancient history and vibrant new world); Circo Massimo (and, as a charioteer, I felt that two huge white horses pushed that invisible and indefinite part of me into even higher places); Piramide (where, as the myth goes, Romulus buried Remus); Garbatella (the mythical area built as a garden city around the Via delle Sette Chiese, which can easily be mistaken for a neighborhood in Buenos Aires)…

Thus, with the euphoric vibration that dominated my now completely lucid movements, the subway got to Basilica San Paolo, where an impressive church stands which, so they say, hosts the sepulcher of Paul of Tarsus (he who received god through lightning). I began to walk the three or four blocks that separate the subway station from Casale and, to my great joy, from a corner, the voice of a woman shouted my name in Italian. That first meeting after four years was like in a movie: the beautiful Giulia, an activist in La Città, was welcoming me literally open arms (it was at the corners of Pietro Giordani and via Gabriello Chiabrera). Besides being an activist, Giulia’s life story is worth including in a film (read her story and listen to her in this link).

Thus I finally got to Casale, which is also the home of long-term volunteers who give life, during the months they stay there, to many projects within La Città, adding up more than one heartbeat to the big heart of this space.

Via Valeriano 3, where little things happen, those things that utopians call insufficient and we, realists, believe essential. Where one understands from praxis that any theory is merely a hypothesis and that any legitimate change generates from whatever an individual body expresses they need, and not from supposedly scholarly discourses that proudly state what they know to be the basic needs of every man.  The Città dell’Utopia, where you can find people who understand that it is not time to wait until any condition is given, but that it is urgent and possible to create the minimum conditions required by the here and now. People who grow up at a personal level while they sow seeds of new ways and methodologies on the fertile soil they are standing on, which they till and water every single day, without falling into despair, much as though it would sometimes seem like the only thing to do. 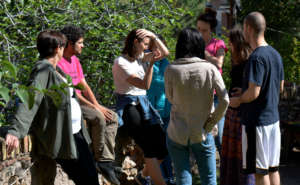 Louison, from Tahiti, an activist as peaceful as, I guess, the Southern seas that saw her birth, who is fire burning more and more each time and that feeds mainly from Art. In her, universes of words are hidden, stages, clothes and emotions that are making one of the most prolific and colorful stagings of which she is the director and in which she exposes, courageously, her artistic body, telling stories that free all women around the world, empowering them and giving them back the innate right they seemed to have lost, placing them under the spotlight, turning them into examples of persistence and lively and creative nature. The igneous voices of Louison’s characters also redeem those who are left behind, those who suffer from the slavery imposed by the fervent advocates of what I understand to be humanity’s original sin: the belief that there is only one way. Also, Louison cooks the most delicious brownies I have ever tasted and she likes finding a place to sit in nature, under the sun, in cool days. It was she who taught me that it is not necessary to wield any sword to convince anyone of anything. That, as Whitman used to say, not more nor less than a presence of integrity can break loose in others the chains that do not allow them to walk (the truth of which has to be experienced in one’s own skin, needless to read or be told about it!).

Alessandra, from Italy, the perfect balance of beauty, intelligence, sensitivity, passion, authenticity, freshness and strength. The first day I saw her, she was weaving a papier mâché magic wand that a certain “signora pazza” had given her somewhere. She probably did not know it but, in her hand, that object, exotic to most people in the world, drawing indefinite doodles in the air of spring, spoke about her way of creating: the efficiency of simplicity, the unity of word, action and emotion, the trust in the truth that wherever we may be, we will always be surrounded only by those people with whom we will have the opportunity to create. In her, the loving energies of the Earth coalesce and create around her that which makes her what she is: a ragazza carina, able to embrace her pet dog, Tsipouro, with the same enthusiasm that she embraces her friends or a total stranger like I was the moment I arrived at Casale. Whatever omniscient and plainly happy authority in the world has said that to change the world magic is not needed?