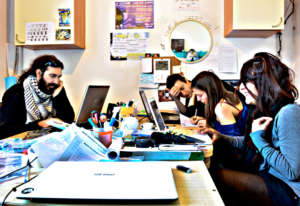 Among the long-term volunteers this year, I also met Yana, from Ukraine. She has been in Casale for some months now and I had the opportunity to join a work camp (The Soup Festival) she coordinated. With a cheerful spirit, Yana consummates her desire to give by being a transparent water stream, with her deep will to learn about everything, embracing each one of the volunteers she was leading, reflecting all their gazes in her own eyes, delving into their stories and rescuing from each one of them not only the skills that better suited the context but also, and mainly, those that put them in contact with the best version of themselves (understanding by “best version” that instance of oneself that feels complete and realized). The authenticity and lightness of her movements is evidence of rivers that flow within herself, defining her silhouette with a precision worthy of those who know what they want and what they can do.

Damir, from Serbia, a philanthropic clown who knows how to transmute dense energies into air, with an acute perception of the world, attentive to details that most of us overlook. During the time I was living with this family in Casale (almost a month), there was no single day I wouldn’t be delighted by his timely smile and perspicacious insights. And, of course, the small glass with rakia, which he shared with us after the meals, had its best effects on the group: it not only shook away our siesta ambitions but it also pushed us to keep on working, inspired now also by that exquisite plumb elixir, made by the hidden dimensions of his family’s hands. From him I learnt, most of all, how necessary it is to laugh if one wishes to change the world. Now I am writing it down, I wonder, how ever would it be possible, truly, without the power of laughter? Why not using, in that extremely hard work, which will surely last all of our lives, the most non-lethal weapon that provokes mass rebellions? 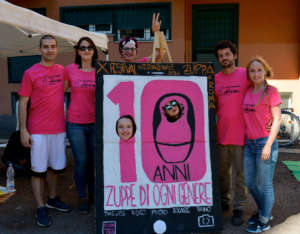 Finally, the person who coordinates Casale, who makes sure, day by day, that this magnificent huge living house feeds and breathes the purest air, that its cells keep on restituting themselves efficiently. Who guarantees that its heartbeat is the healthiest possible: Silvio, an endearing long-haired Roman who smokes rolling tobacco called Pueblo, carries a kitchen lighter as a cigarette lighter and does not hesitate to use it anywhere, with the same spontaneity and grace as that of a child. A born activist, during his early youth he did several jobs until he got to Via Valeriano 3, where his name is on everyone’s lips for the simple reason that they trust him and believe in him. From skillfully and exquisitely cooking for events that take place in La Città, to interviewing the possible work camp coordinators, setting up sound equipment for festivals and exhibiting handyman and gardener expertise, or welcoming wandering friends (like me) as if they were brothers, Silvio is Casale; Casale is Silvio.

One evening, with a spritz drink in his hand, at the Chiringuito opposite the Basilica of San Pablo, while we shot the breeze a little, and also rambled on the labyrinthine doings of human emotions, the nonsense of foreign politics and the so-long-desired revolutions, he honestly and acutely stated: “Give me total freedom, or do not give me anything at all. Teach me to be a ‘leader’ of my own self so that, when the time comes, no one needs to lead anyone. That, for me, would be a perfect society. That means, as I understand it, to be a revolutionary.” The spirit of La Città dell’Utopia, a huge flow of amassed energy, in service of a better world.

All this, more or less, was what La Città dell’Utopia imprinted on my body this time.

And this is and will be for me not only this huge house in San Paolo neighborhood in Rome, but also any other place that believes in the progress of humankind, whose inhabitants are people “who do not have” any reason to help but, in spite of that, they help, giving that which the other really needs and not what any materialistic or idealistic philosophy or theory states they need. 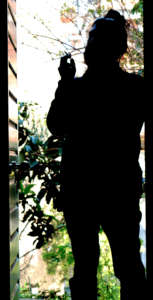 A reason to speak your language when you are the only one in the group who does not speak their own and who, in spite of that, immediately recognize your presence and communicate in the language you speak.

Those people who include others in their world, and give them a room of their own, and gently let themselves be included in your world, appreciating you.

Who make room so that you can sit next to them even though the sofa is so small that it would not even be possible to swing a cat.

Failing to attest to beauty when one finds it and experiences it is maybe one of the worst things that delay our evolution, I think. Not so much to satisfy a moral or ethical imperative, but to speak up for those who disbelieve in apocalyptic predictions, those who still have not been convinced by the overwhelming machinery of mass media and existential pessimism that hold that the world will soon be over and that there is no new and close horizon at sight.

But it is exactly for all those reasons that it is high time to focus the best of each one of us on what IS working, on what IS generating life, on those who day after day share their wellbeing and good will in this precise moment in which the change we have so long desired is in our hands.

There is another world emerging from underneath this one which is crumbling down. The new world is growing silently, without impositions, just because that will be its cornerstone. And, as I always say, we do not need to travel to begin to find its traces, or smell its fresh and sweet fragrance.

Maybe right now, right where we are, if we look again where we thought there was nothing worth noting, we may find a kindling spark.