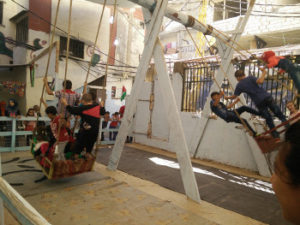 Here there are
The weapons that I like:
the gun that just makes pum
(Or bang, if you read some
cartoon)
but no holes …
the cannon that shoots
without even shaking
the coffee table …
the little air gun
that sometimes by mistake
hits the target
but it would not hurt
neither a fly nor a corporal …
Weapons of joy!
the others, please,
throw them all away!

The weapons of happiness, Gianni Rodari
“Ouch!” I quickly put my right hand on the neck. The point where I have got hit will soon redden. “I will have a bruise,” I think. I turn to the culprit: there he was, the rascal who is looking at me satisfied with a provocative and proud behaviour. I feared that he would do it again, that he would shot me with those stupid little bullets made of plastic, with those stupid plastic submachine guns you can buy everywhere here. The rascal hit exactly the target. On the neck, just below my ear. If it were a real bullet, well, I would not be here to tell this story. He was definitely brave enough to shoot an adult, furthermore a foreigner. I prefer to stop and think, instead of giving vent to my anger on him shouting in Italian. It would be useless, as he would not understand what I say and would just feel my anger. They already feel so much anger around them. I put my pride aside, and I look at him resigned before turning around and going back to my job. I have never seen so many children playing with so many and realistic weapons.

“I got him!”. I had actually pointed to that big, dark and with a beard, but it doesn’t matter, I’ve got the Ajnabi 1 anyway. However, I got distracted. “Ouch! Hafez, that is not fair! I got distracted, as some Ajnabi were passing by. Look at the curly and thin one, I got him! “. “I didn’t see anything and still you have lost, so you’re dead”, “If you get a Ajnabi that is worth double though!”, “We never decided this rule!”, “Look, we are not dead, give me 20 seconds, I walk there and then we’ll see who kills before whom”. I start running through the alley, facing the corner, passing under the arch of Abu Zanner, climbing the stairs of the first floor; from that place through the grating I can see the road beneath me, my enemy does not expect me shooting from the top. I position myself as snipers do, placing the rifle on the grating. The 90-degree arm locks the rifle, so the recoil does not hit me. Mohammed taught me to do this way. “Here it is … 1,2,3 … bam!”.
Today is my first day. It is right the day of sacrifice celebration, with lots of people coming in and out of the camp. It is hot wearing the beret and the uniform, but I am fine. If Fatima were here to seeing me, who knows what she would think, as I have the rifle on my shoulder taking care of the security of all the people. ” Hello Habibi 2 “, “Look how beautiful my Mohammed is. How is the work of the Security Committee going today? Was your rifle useful? “,” Abu Mohammed, your son is a good boy”,” 16 years ago I held him for the first time in my arms, and now look at him “,” he will keep on growing even more Abu Mohammed, still some more muscles here and here, and you’ll see that he will turn into a man”. He squeeze my biceps and mypecs. He is right, I’m still a bit slim …
“Mohammed, Mohammed, please give me one thousand pounds”, I am running toward my brother. Mom bought me a new dress for the sacrifice celebration, it is white with pink flowers but I have to be careful not to dirty it, otherwise she gets angry. I also have braids and a big fabric flower holds them steady above my head. ” Habibti3 what do you need the money for, do not you see I’m busy”, “Please, please, merry-go-round are here, one trip costs a thousand pounds, the swing goes very high.” “Okay, here you go, but please do not go with Hafez, as he goes too high and then you’re afraid.” “Thanks Mohammed, I love you! See you later, huh, Mohammed, you are beautiful with that uniform!”.

I look at the space in front of the Children and Youth Centre. It is usually the only open space where children can play together and safely, with the ball or chase each other without the risk of getting hurt or fall into a pile of garbage. Many children’s games require visual contact between the mates, require open spaces, and Shatila maze is not appropriate for any of them. However, this is a celebration week, so that the space is busy. It would not be right to call them merry-go-rounds. I tell to myself it’s an amusement park for poor people. Colourful wood fences divide the different “attractions” and legions of dreamy children who have already spent their thousand pounds or do not have to pay for the ride are overlooking. There are one iron walker, a couple of small swings, one trampoline. The big attraction is indeed the two sturdy wooden swings with large wooden chairs lined with Persian rugs, where even 7, 8 children can stay. The two biggest ones stand up on the edge of the seat, and they push the swing bending their knees when they reach the highest point. The swing comes just at the top, above me. I find myself gazing at a little girl, who leans dangerously. She wears a white dress with pink flowers.

1) Ajnabi: foreigner in Arabic
2) Habibi: dear / darling in Arabic
3) Habibti: habibi families
Alberto, Aran, Ilaria, Luca, Marcello, Maria and Martina
Story written by male and female volunteers who are taking part to the SCI voluntary camp, so called “Shatila Refugee Camp” in Beirut. Although it is fictional, it is inspired by situations really lived during their stay in the Shatila refugee camp.